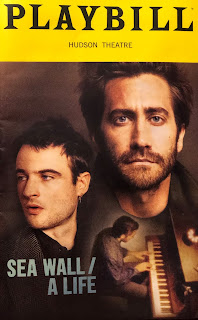 We sometimes fail to realize that others don't think, feel or experience life the way we do. So their opinions and reflections may come as a surprise to us. Such occasions are ripe with the possibility to get to know them better, and more intimately if we just follow our curiosity to learn about their perspective.

I was presented with such an opportunity this week.

My daughter Nina and I saw the play Sea Wall/ A Life at the Hudson Theatre in Manhattan. There are plenty of reviews that you can read about the play and the performances. That's not what this story is about. It is about how two generations experienced it so differently, based on what their life experiences have been.

The play tells two stories of love, loss and grieving, through two monologues, separated by an intermission.

The first story is by Simon Stephens and is narrated by Tom Sturridge. It starts out charmingly enough as Tom chronicles his idyllic life that includes a wife who he is insanely and completely in love with, a gruff father- in-law that he has created a deep bond with, and a young daughter who has him wrapped around her little finger. They visit his father in law every year in a little town by the sea in France.

Tragedy strikes at one of these visits in a most unfortunate manner. Tom's young daughter, under the care of her doting grandfather, during a brief unsupervised moment falls off a cliff. This happens as Tom watches this unfold as he swims in the the water, ironically, taking in the perfection of the day. Her untimely demise causing gut wrenching agony and grief for her family. The monologue is descriptive of the complexity of Tom's sorrow and grief and the mixed emotions that Tom has for his father-in-law, whose momentary inattention resulted in the accident. His nuanced performance creates a space in the theater, leaving Nina and I both deeply immersed in the story. 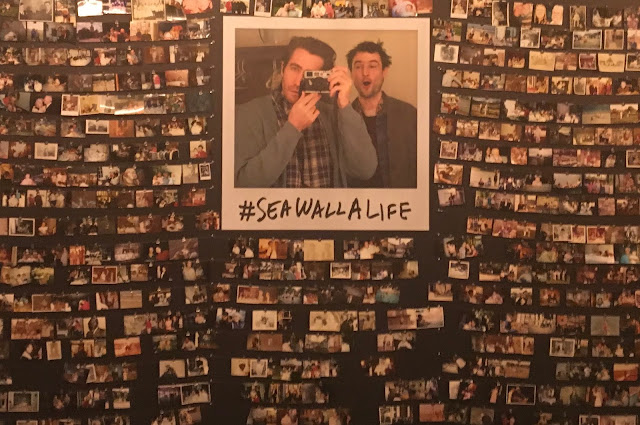 The second story is by Nick Payne. Jake Gyllenhaal plays a character called Abe who bumbles through the birth of his first child, a daughter, and the death of his father. The transition between these two story lines is razor thin at times, leading the audience to sometimes miss the appropriate emotion as Jake moves from one scene to the next. However, his internal conflict of the huge variation of his emotional investment in his father's deterioration and ultimate death and his daughter's impending birth and her arrival is obvious. Even during moments when he is rapturously engaged with his new born, and is looking at her with wonder and awe, he remains with his focused and preoccupied with grief over his father's passing. This adds an element of guilt to the cauldron of his pain.

After the play ended, Jake invited interested audience members to share their feelings and thoughts about their experience of the play. Nina wanted to do that so I did too. That is when I discovered how different our evening's experience had been.

Nina had been most affected by the story of the slow deterioration and death of Abe's father. She realized that she had not yet suffered the loss of a close relative and her mind kept going to thoughts of her losing me and her father. I, on the other hand was much more affected by the first story and imagined the despair I would feel if my children died before me.

We both went to a dark place but for different reasons.

Being curious and genuinely interested in each others perspective brought our conversation to a level of intimacy and understanding that did not exist before that evening. And that is the magic of conversations. They create a bridge to connect with others. Feeling connected to those who me love gives us a sense of well being and belonging.

So tending to our relationships are an act of Self Love Self Care First for sure.

I leave you with 3 things you can do to practice this essential form of SLSCF.


You will quickly see how these simple steps make you feel happy. In addition to making the recipients feel loved and appreciated. It's a win-win!

Jake Gyllenhaal and Tom Sturridge did a terrific job of taking us to a space where we felt the stories they were telling. And both stories were about relationships, love and loss. Bravo to them both! Nina and I left Hudson Theater not only having enjoyed a wonderful, through provoking play, but also more connected to each other.

Wishing you a week of great conversations,
Love,
Sunita
Be well Do well Live well

Posted by Sunita Merriman at 7:46 AM