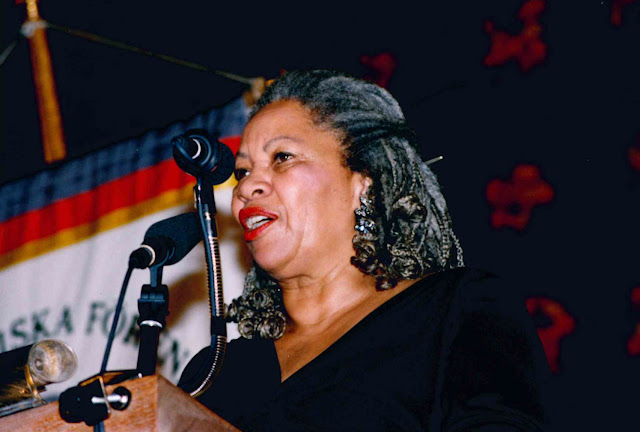 We lost a towering human being this week. Toni Morrison died on August 5th, 2019 after a brief illness. Ms. Morrison, a celebrated writer , influenced and touched millions of people in her lifetime. Tributes poured in and continue to, describing the effect she had on individuals.

Toni Morrison was a national treasure, as good a storyteller, as captivating, in person as she was on the page. Her writing was a beautiful, meaningful challenge to our conscience and our moral imagination. What a gift to breathe the same air as her, if only for a while.- President Barack Obama

In the beginning was the Word. Toni Morrison took the word and turned it into a Song…of Solomon, of Sula, Beloved, Mercy, Paradise Love, and more. She was our conscience. Our seer. Our truth-teller. She was a magician with language, who understood the Power of words. She used them to roil us, to wake us, to educate us and help us grapple with our deepest wounds and try to comprehend them. It is exhilarating and life-enhancing every time I read and share her work.This pic was her first appearance on the Oprah Show.She was Empress-Supreme among writers. Long may her WORDS reign!- Oprah Winfrey

Toni Morrison's talent and courage made her contributions to humanity so vast and deep that eulogizing her in a way that would reflect any resemblance of her impact on us would be impossible. So I won't even attempt to do that. Instead, I would like to share the words of this incredible woman that made a deep impression on me and serve as a guide to how I aspire to use words.

On December 7th, 1993, Ms. Morrison delivered her Noble Lecture on the occasion of her receiving the Noble Prize in Literature. You can hear Toni Morrison's Nobel Lecture too.

"...She's worried about how the language she dreams in, given to her at birth is handled, put into service, even withheld from her for certain nefarious purposes. Being a writer, she thinks of language partly as a system, partly as a living thing over which one has control- but mostly as agency..." Toni Morrison.

Most of us cannot be Toni. Neither should we aspire to be her.

We should aspire to be the very highest form of who we are.

That is enough. And that is much more than who we usually live as. So I take Ms. Morrison's words about language as an inspiration to use words to speak my truth and to speak out against what I know is the opposite of truth.

That is what Ms. Morrison did with everything she wrote. She used language as a vehicle of agency.

How do you use language? I challenge you to ponder this question and furthermore, see how you can you be inspired by the work of Toni Morrison to be the voice of our collective conscious in the trying times of today.

I wish you a week of language,
Use it wisely and deliberately.
Our voices have power!
With my love,
Sunita


Posted by Sunita Merriman at 1:13 PM