William Styron Paints One of the Most Vivid Pictures of the Dark World of Depression. 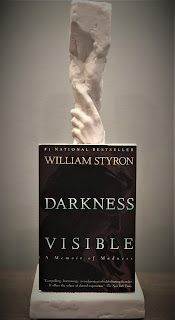 William Styron is well known for his body of work, many literary awards, and commercial success with his books. Notable amongst them are Lie Down in Darkness, The Confessions Of Nat Turner, (which won a Pulitzer Prize) and Sophie's Choice, (which was made into a superb movie starring Meryl Streep, Kevin Kline and Peter MacNicol.) However, it is in Darkness Invisible that he gives us a special gift of incredible value.

William Styron describes his descent into 'madness' by vividly painting a picture of how depression wrestles with a human being and pins him down. There is no getting up from under this million pound gorilla. Styron is effective in conveying the helplessness one experiences when depression engulfs one. There is no 'thinking out' of this illness. It is a disease just like any other physical illness that has visible symptoms and signs. Imagine telling an automobile accident victim to put back their severed leg on their body by thinking 'hard enough and positively enough'.

Styron laments towards the end of the book that he should have been hospitalized for his depression long before he actively started to consider suicide as his only way out. As he quietly prepares to kill himself, it is only after hearing a soaring passage from the Johannes Brahms Alto Rhapsody  that he feels a connection to his world. The music gives him pleasure which reminds him of the deep love that he has for his family. This momentary withdrawal from the numbness of depression allows him to discover that he could never inflict on them the pain that his suicide would. He immediately wakes his wife Rose up and makes arrangements to be hospitalized for depression. He remains in the hospital from December 1985 through February 1986. Darkness Visible : A Memoir of Madness' was first presented as a lecture by Styron. The best selling book was released in 1990.

Before I accepted that I had off and on for years suffered from depression, I was not willing to even entertain that possibility. It wasn't that I was in denial. It was just that I believed that everyone went through 'bad patches' and it was part and parcel of the landscape of being human. A lack of awareness of the importance of mental health and a total buy in of the stigma associated with any kind of mental illness was a hallmark of my family culture. In all fairness, this was not very unusual in the times that I grew up in, nor in the cultural context of my upbringing.

So when I finally hit a wall that I could not find a way through, I sought help. And I learnt that in my case, depression was only the calling card of all the trauma and invisible damage that lay hidden behind it. But that's another story for another day...

Even while in treatment, I would beat myself up for not being able to 'think my way' out of the darkness. I thought that it was my fault that I was not getting better because I was not 'trying hard enough'. I would repeatedly tell myself that I needed to be more 'positive' to get better.

With this, now what I recognize as deeply flawed thinking, based on society's uneducated and ignorant projections about depression, anxiety and mental illness, I tortured myself endlessly. I manufactured feelings of shame, failure, hopelessness and worthlessness. And this misery was on top of what depression, toxic stress and ACE's were doing to me.

I now understand what trauma does to a brain. Especially a young infant or child's brain. It is complex and very complicated but this damage is now well understood by researchers and clinicians. So the success rate of treatment of such trauma is steadily increasing. Depression has many forms and causes but a very big component of etiological factors resulting in depression is childhood trauma.

Depression is a real disease. It must be recognized by healthcare professionals. It must be respected as a tenacious and clever invader of our minds and bodies. Even though it usually has a complex origin, it's source must be determined and diagnosed as best possible. And finally, it must be treated. Once the severe phase is over, depression requires us to be vigilant about it's return and recurrence. It demands a lifestyle change to stay ahead of it and not be ambushed by it when it returns.

A life entirely free of depression may not be possible for everyone who suffers from this illness, but a diagnosis does not mean a life sentence of misery, a joyless existence or thoughts or the actual step of committing suicide as the only means to find relief.

Depression is a treatable disease. In many cases, permanently. In some cases, it can be well managed with medications and talk therapy.

But the first step is recognizing that you are depressed and then seeking help.

I share with you my poem 'Arousal' from my book Stripping : My Fight to Find Me It is #17 in the collection of poems.

My slumber went unnoticed:
No reason for detection,
No cause for concern,
No need to wake up from this deep sleep.

I opened the door
To a gentle tremor
Innocently,
Unsuspecting
Of this avalanche that I was hiding.

Incidentally, William Stynor lost his mother at the young age of 12 and considering those times, most likely did not get the emotional support and assistance a young child needs to grieve and heal in a healthy way. He hit the wall at age 60 before suffering from Major Depression. In hindsight, he picked up on his predisposition to mood swings and depression earlier in life and also realized that his family's emotional history was marked by this predisposition as well.

I challenge you to be honest with yourself. Are you just surviving or thriving? Do you need to look at your family's emotional history and your life thus far. You deserve to THRIVE! Not just survive.

Wishing you a week of honest discovery!
Until next time,
Warmly,
Sunita

#selfloveselfcarefirst
Posted by Sunita Merriman at 11:24 AM