Seneca on 'Groundless Fears' - Can he Shed Light On Our Silent Epidemic? 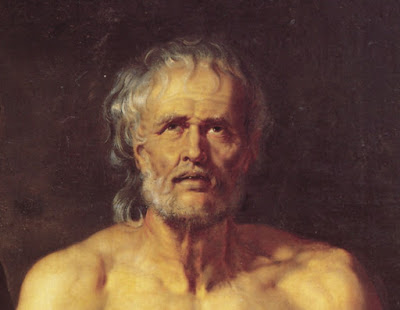 Last weekend, I was watching my younger daughter play volleyball at the NorthEast Qualifier Tournament in Philadelphia. It is one of the major tournaments in our area and the Philadelphia Convention Center was set up with scores of volleyball courts. The noise level was enthusiastically high and the energy level was incredible. It was exciting to watch these 15-18 year old young girls compete. The convention center was brimming with a special kind of vitality that is associated with youth.

During a break, I noticed an email in my Inbox from the Superintendent of our School District. Normally, I would skip such communication on a weekend but it's subject was marked : IMPORTANT. So I opened the email and scrolled down the body of the message.

The Edison Township Public School District has experienced a terrible tragedy. Last evening, we were informed that a 17 year old student at Edison High School has died.  The cause of death was suicide. Our thoughts and support go out to her family and friends at this time.

All of a sudden, a silence hit me amongst the noise that surrounded me. For a few seconds, I couldn't move. The volleyballs on all the courts continued to sail through the seemingly silent air, but time stopped for me. I quietly showed the email to my husband who also withdrew in a private mental space of horror and sadness.

The email had information about the Crisis Response Team that would be onsite the next day at the High School and provided links to support groups and information for both parents and children.

After the initial shock of this information wore off, I sadly realized that my response had no element of disbelief attached to it.

How and when did we become a society in which the death of a child/teenager by suicide is no longer SHOCKING NEWS? It's almost like we have begun to expect to hear about such tragic events on a regular basis.

What 'reality' do these young people see in their mind that prompts them to decide that their life is not worth living? What is driving this hopelessness and inability to see beyond the minute, hour or day of seemingly unending desperation that leads them to attempt to end their suffering by suicide?
How is the concept of self love and self care so foreign to them?

Our mind is the driver of our life and the mystery of its workings has been the topic of thought and discussion for centuries.

In his 13th letter to Lucillius, in the series titled the Epistulae Morales ad Lucillium , Seneca the Younger writes about  "groundless fears",

"There are more things … likely to frighten us than there are to crush us; we suffer more often in imagination than in reality."

The horrific Silent Epidemic of Youth Suicide marks our times. What I would give to have Seneca (c. 4BC-AD 65) ponder on why our children are so severely separated from reality in their imagination ...

Seneca is not here to give us an immediate and concise answer to that question today but the series of his 124 letters has many of the answers that we seek. I will discuss his work in more depth in future conversations, tying in his wisdom to serve as possible solutions to the challenges our minds face in these trying times, but in the meantime, there are many resources that can help parents and community members  learn more about youth suicide.

The most important thing to remember is that SUICIDE IS PREVENTABLE.

Every child that dies by suicide is our child. To think that we are helpless to prevent this from continuing to be a 'regular occurance' in our communities is unacceptable. We can all do our part by learning more about this silent epidemic as a starting point of changing the tide of this rising statistic in our society.

I end by sharing this letter with you.


A Letter from Jason’s Father

Dear Friend,
Jason was my youngest son. He was an average 16-year old. He got mostly B’s on his report card, and he loved sports. Especially football. He was active in his youth group and he had a lot of friends. Jason was the one who was always up for going places and trying new things. From all appearances…my son loved life.
But on July 16th in 1997, everything changed. My son, Jason became a statistic of the “Silent Epidemic” of youth suicide. In trying to come to terms with what happened, I began researching youth suicide. The statistics are very alarming. Did you know that on average, over 100 young people this week will become victims of youth suicide?
Youth suicide can be prevented, and that is what The Jason Foundation is all about. I urge you to get involved. Together we can help stop this epidemic. Ask for our material. Read it. Then share it with your friends, family and others. Please help us reach out to hurting teens with another choice.
I will never hug my son again. But I can and will work alongside you…perhaps to save your friend, your neighbor’s child, a relative or even your own son or daughter.
Thank you for your support of any kind,
Clark Flatt
President
The Jason Foundation Inc.
Youth Suicide Statistics- Parent Resource Program

Let's remember that every moment we have with our children is an opportunity to express our love for them, celebrate them and connect with them. I did last week and after sending out a silent prayer for the family that suffered such a tragic loss in our town, decided to cheer as loud as I would could for my daughter, her team and the hundreds of young girls that came to Philadelphia to compete at the NEQ Qualifier.
Be well, Do well, Live well,
Until next time!
Sunita
#selfloveselfcarefirst

Posted by Sunita Merriman at 7:17 AM