Robert Frost, The Road Not Taken and the Pioneers Need for Self Love and Self Care First 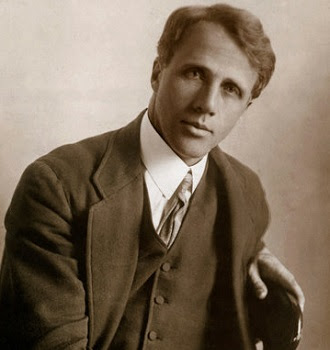 The year was 1916. The poem The Road Not Taken by Robert Frost was published in the collection Mountain Interval. 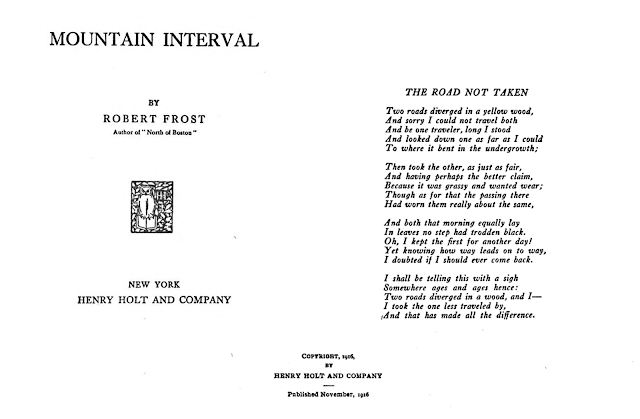 ...
"Two roads diverged in a wood, and I-
I took the one less travelled by,
And that has made all the difference."

Who cannot be moved by these words of the famous poet?  Like with any poem, its interpretation is personal. I understand these words to be a call to create a life that is of our choice and not common . These words inspire the reader to take a path that leads to an unknown destination. Implied in following that advice is a promise that it will be a journey worth taking.

What did Frost mean by "And that made all the difference?" What is the 'difference' that he refers to?

I believe the path that he wrote about to be the journey that we say yes to when we follow our truth. It is lit by the brightness of our intuition and is guided by our inner voice. We become pioneers of our destiny.
pi·o·neer
/ˌpīəˈnir/

The year is 2019. The blog Ahead of the Curve by Seth Godin gives you an idea of what a journey that most others have not yet taken looks like. He paints a picture of turbulence, uncertainty, challenges and danger.


Ahead of the Curve
When you’re traveling ahead of the curve, it’s silly to imagine that the road will be straight and flat. It’s actually more like a cliff. With bumps.
That’s all part of the deal. That’s why it’s not called the curve. You’re in the void, uncharted, ahead of what’s behind.
In fact, ahead of the curve, the weather is pretty lousy too. Often with catastrophic lightning storms.

So why would anyone in their right mind choose to be ahead of the curve, on a road less travelled ? Because, as Seth explains, "you get the thrill of finding a new path instead of merely following the old one."

There are countless examples in history of individuals who spent their lives honoring their truth in the life choices they made. Many a times they changed the course of history. Mahatma Gandhi made a stand and chose non violent civil disobedience over the raging fire, violence and mayhem of political and religious conflict that existed at the end of the British Colonial rule of India. It may seem like an easy choice today, but at that time, he was going against the grain of his countrymen and considered a traitor by many. But he wasn't deterred by what others thought of him and was steadfast in his message of non-violence in the pursuit of India's independence and to this day, is held as an inspiring example of moral leadership.

Gandhi took the road less travelled and was certainly ahead of the curve.

If you want to design your life around your truth, it will be worth it. But it will not be easy. Because 'worth it' does not equate to 'simple, safe and pain free.' So Self Love Self Care First becomes even more urgent and necessary when you are a pioneer of your life.

Here are some fundamental SLSCF tips for you if you are a Pioneer.


I leave you with good advice from Ellen, who I admire greatly, as an exception to the rule that Robert Frost alludes to.

"Follow your passion. Stay true to yourself. Never follow someone else’s path unless you’re in the woods and you’re lost and you see a path. By all means, you should follow that."

Until next time,
With my best for you and your unique journey,
Love,
Sunita
#selfloveselfcarefirst#RobertFrost#poetry#theroadnottaken#sethgodin#mahatmagandhi#ellendegeneres#pioneer

Posted by Sunita Merriman at 7:40 AM